The 19th annual Joseph Medill Patterson scholarships in journalism at Fordham University have been awarded to Thomas J. Baskind, 20, a senior, and Brian T. O’Hanlon, 19, a junior, the university announced yesterday. 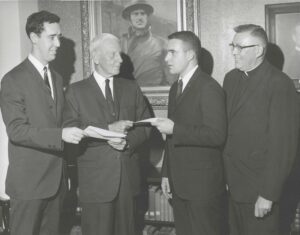 The awards of $1,000 each, instituted by THE NEWS in memory of its founder and publisher, were presented to the students by Richard W. Clarke, Editor of THE NEWS, in a ceremony in the Joseph Medill Patterson Room in THE NEWS Building, 220 E. 42nd St.  The Rev. William K. Trivett, S. J., chairman of Fordham’s Communication Arts Department, accompanied the students.

For Thomas Baskind, it was the second consecutive year in which he was recipient of a Patterson scholarship. He is a staff member of the Ram, Fordham’s undergraduate newspaper, and has worked as a part-time reporter for the Long Island Press.  He has also served as a student member of Fordham’s Public Information Office and is now employed by the Raymond Wood public relations firm at 40 E. 49th St.  He lives at 25-19 34th St., Long Island City, Queens, and is an alumnus of St. Francis Prep, Brooklyn.

O’Hanlon, who lives at 2715 Grand Concourse, Bronx, is also on the staff of the Ram.  During the summer he worked as a researcher for Newsweek magazine.  He will continue art time with Newsweek during the school year.  He is a graduate of Fordham Prep, where he was co-editor of the school newspaper.

The university announced that of 40 graduates who have been awarded Patterson scholarships, 14 are working newspapermen, sixare magazine editors or writers, five are in public relations, two are in advertising, and two are college professors.

Four who intend to continue interrupted journalism careers are now in military service.  Another, Frank J. Casey, of the class of ‘64 was killed in action in Vietnam last Oct 30h while serving with the Marine Corps.

Two of the former scholarship winners are with THE NEWS- Arthur North, an administrative assistant, and Michael Iachetta, Sunday feature writer.  Another, Louis Boccardi, former assistant managing editor of the World Journal Tribune, is now executive assistant to the general news editor of the Associated Press.